A Circle of Friends 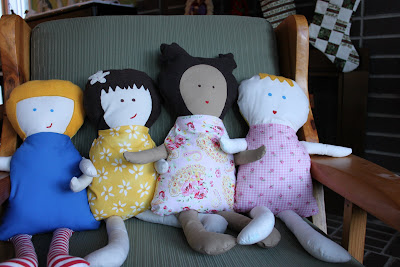 We had way too much fun making Christmas dolls this year- they're positively addicting.

I free-handed the pattern, but based it on the general shape of the famous Black Apple dolls at Martha Stewart. The hair was my own design for each doll, to match the little girl who would receive it. I tried to match skin color too, but had a limited selection here. My own daughters fairly glow in the dark, which is pretty true to life though, now that I think about it.

The general pattern for these beauties can be found here.

If you're going to make some, the best tip I can give you: Draw or print your pattern piece, and trace exactly as it is onto the backside of your fabric with disappearing ink.  Cut roughly around your shape, and stitch on the line.  Even up the seam allowance after you've sewn.  There!  Now you have dolls and not blobs (or am I the only one who is rotten at tracing a pattern and sewing a 1/4 inch away???)

When designing your hair, the hair piece of felt should be the same size as the face piece of cloth.  Start out by tracing the face piece onto your pattern paper, then change the shape to be the hairstyle you want.  Sew the felt onto the face cloth, and then carefully snip away the excess at the hairline before you attach the front of the face to the front of the body.  Obviously, if you make the hair bigger than the original head, cut the the head pieces larger to accommodate the extra hair bits, then trim it up after you sew.  Unless you're a whiz on that sewing machine, the hair will be mostly free-form when you sew so don't even try to shape the head pieces before you sew the hair on!

I used similar-colored cloth for the back of the head- it seemed sturdier than the craft felt I was using for the hair.

The faces are painted on, and heat set with an iron.


Here we have Ernie and Mimi. 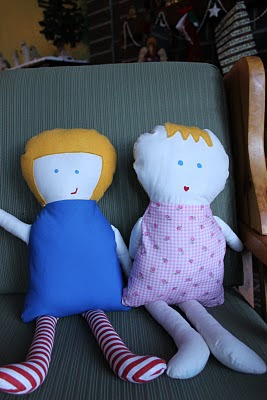 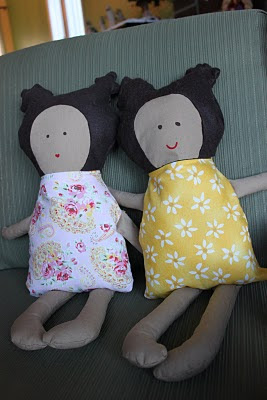 The the unstoppable BBJ. 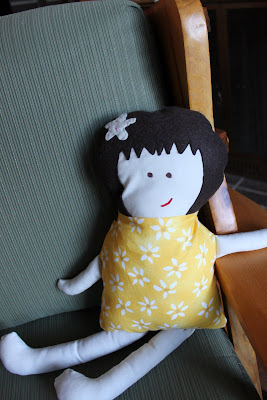 Labels: I Made This, tutorial

What a great job you did! I wonder if my girls have outgrown dolls?

quarter inch foot for your machine, it's a lifesaver. But, otherwise your method works great too.

You are very creative. I think these dolls are really cute. Wish I was more of a sewing person.

Sing another song! Do you take requests? Do you know any show tunes?

Have a great day tomorrow!

Those are sooooo cute!