School has been... Bad lately. Really, really, bad. Apparently it's super hard for a seven-year-old to concentrate with a holiday season that stretches from October to January 1st. (We also celebrate six family birthdays in that stretch, not including folks that don't live near us.).

Mimi has been begging me to do school with get, and loves her workbooks. It takes her about two days to finish a little twenty page book. Yikes. (She is also adamant that she is going to GO to school, not stay home with me. That would mean no kindergarten for her till after next year, because she turns five after the cut off. No kindergarten till two weeks before her sixth birthday. I don't think she's going to stick with that plan, do you??).

Anyway, Mims begged me to do a learning game with her, so we pulled down Chutes and Ladders while Cocoa slept. We played with new rules: if you can't answer the math problem I give you, you can't take a turn! Ernie was whipping through her double-digit, carry the one, addition problems. Mims added her piles of plastic jewels, AND did subtraction. Flawlessly.

A better day of school! We finished our current book, A Little Princess, and did a spelling test, a dictation exercise, and Ernie wrote an e-mail (what I am letting her so for composition, instead of writing papers. Helps with her typing, spelling, sentences, AND family relations. Winning!)
Posted by Myrnie at 3:24 PM 1 comment:

We put up our Christmas tree yesterday- after years of real trees from Ikea (can't beat the $10 price!) we picked up a plastic tree this year. No more dropped needles, no more nearly losing the tree on the freeway ( that would be me), no more fire hazard. No more wrapping lights on te tree. And no more good smell, but I'm going to make some swags this year!

Daddy and I put up the tree and the girls put up the ornaments. We aren't decorating much for Christmas this year- Cocoa is a wrecking ball, and a lot of things didn't meet my threshold of durability testing.

After we decorated, Wonder Daddy went out for errands and came back with a new light fixture for the kitchen- our fluorescent lights died a week or so ago and I've been cooking by table lamp light. Charming, but awkward :). We installed that, and we all had a movie night to watch Arthur Christmas- seriously great, sweet, movie. We all loved it! 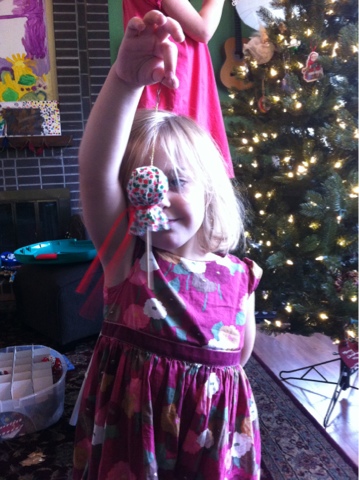 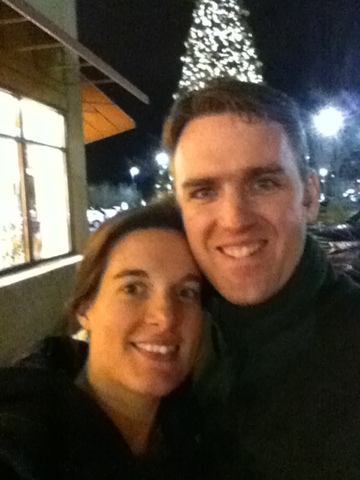 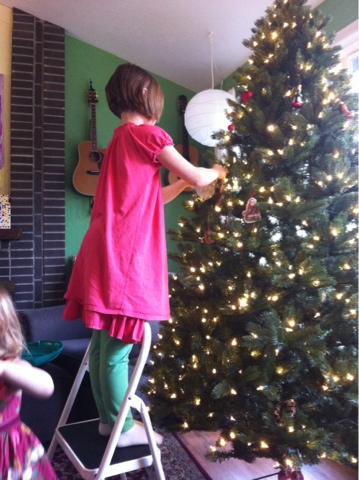 Posted by Myrnie at 7:27 AM No comments:

Right after this I was beaten

We made a brief trip to the grocery store this morning for some buttermilk ( my store was out last night when the intrepid Wonder Daddy took my list for me!). We also briefly lost Mimi in the nearly empty store when she left the line to return her mini cart (one lane over) and somehow found herself in the candy aisle. I told the checker I was missing one princess and we called her on the loudspeaker.

Cocoa took his nap while I burned through a few pounds of sugar and a dozen eggs to make pies for tomorrow (lemon chess, brown butter-buttermilk custard, and chocolate cream with Oreo crust.). There will be a pumpkin pie as well. I'm considering making an apple pie, too, but that might just be crazy talk.

The Halloween pumpkins are in the oven now, roasting, to make a vegetarian coconut curry soup for tomorrow, and all the egg whites left over from making all those custard pies are in the other oven, as meringues. Of course, I misread the recipe and tripled the sugar. Pretty sure no one will mind around here!

Wonder Daddy and I will go on a date tonight, while the kids eat pizza and watch a movie with their grandparents. I think I'm just going to have to find a smoothie shop, to make up for all the sampling I've done today, and for what I know I'm going to do tomorrow!!! 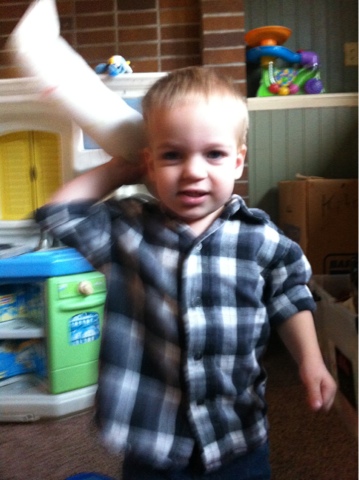 Posted by Myrnie at 4:02 PM No comments:

A slow Monday here. Lots of cartoons and book reading. Cocoa caught a cold over the weekend, so no Zumba for me this morning (which helped to slow down our schedule!).

Ernie is sick with stomach problems again- it's been a long time coming, and we've turned to medication again as well. That's always a bit stressful for her, dealing with the effects of the medicine. Poor thing.

We made our "Thankful Tree" tonight for family night- Daddy wrote on leaves what everyone is thankful for. I've been anxiously awaiting my next turn to teach the lesson or lead the activity, but it takes a while to rotate through everyone! Glad my chance came before Thanksgiving did :) 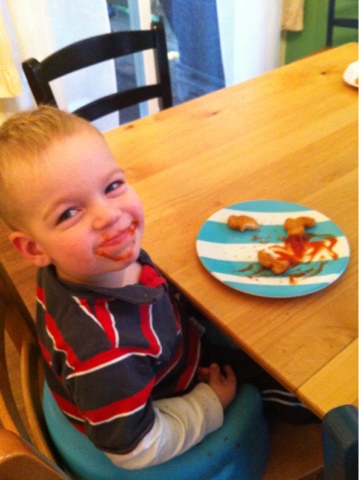 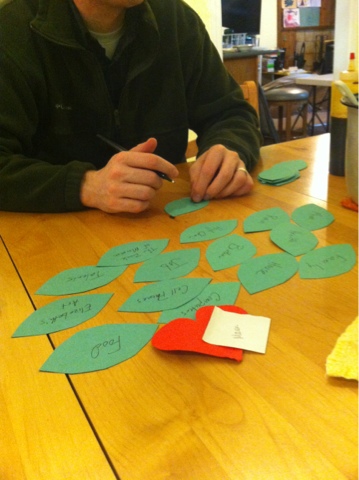 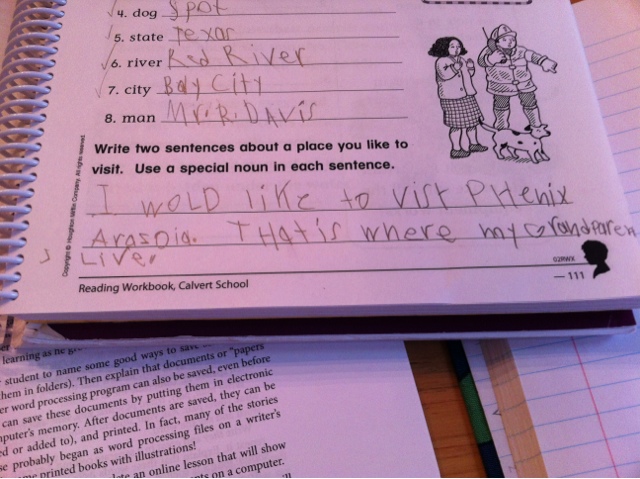 Ernie loves to draw, doodle, and color right now. I pulled out some really big newsprint paper for Cocoa to color on the other day and her eyes got so excited. She drew while I read to the girls during school- this picture was made especially for Mimi. Amazing how exciting it can be to just have a bigger canvas and a bigger box of crayons!

Ernie says it's Mimi, wearing a necklace. She's surrounded by rays of her favorite colors of the day :) 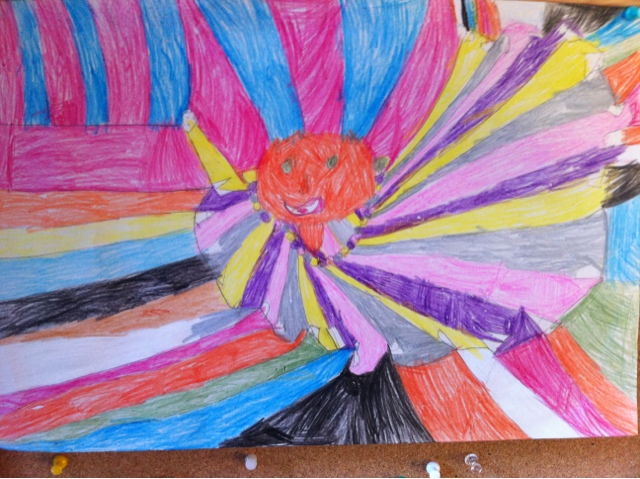 Did I mention my resolutions and goals this year?  Probably not.  I really, really, REALLY wanted to sing on a stage.  An actual stage, with lights and microphone and someone or something great to accompany me.  A hard goal, considering I had to convince someone to give me that chance....and I only have one shot at a stage like that right now.  Our stake (a collection of 12 or 13 wards designated on a map) puts on a yearly Christmas show.  Auditions were back in September for the solo parts- this year, the solos were from Handel's Messiah.  I found out about the auditions 6 days before they happened, and decided to prepare for the alto AND the soprano auditions.  Because learning 4 arias in 6 days is totally a good idea.

Auditions happened at 8:00 am at the church- I had already been up for hours setting up a garage sale for our homeschool co-op.  I totally underwhelmed them.  In fact, the response I got back was ""Lovely tone at times and nice range. Vocal chords became fatigued by the end of the audition losing some of its earlier suppleness and tone resonance. Needs more confidence on notes, especially during descending runs."  See how smart I was to try and learn four technically demanding pieces in 6 days, and then try and sing them one after another at 8:00 am after working at a dusty garage sale?  YES!  GENIUS AWARD!

Three sopranos, two altos, and one man came to audition.  I was chosen as an understudy to a friend with an absolutely amazing, polished, glorious, indefatigable voice.  Totally disappointing, and completely understandable.  Ah well.  I attended once a week rehearsals for the choir, and then added once a week rehearsals for the soloists.  Busy, busy!  We worked as a choir, we had master classes to help fellow soloists polish up, we worked with the orchestra to get the timing down.

And that wonderful girl informed the director 6 days before the show that I would be performing the soprano section of "He Shall Feed His Flock."

Picture me, hair done up, make up on, and in a ridiculous red sparkly dress, in front of a thousand people.  With a Jumbo-Tron behind me.  And very, very nervous.

Halloween (And a winner!)

Congrats to J., the winner of our Halloween contest.  I was, in fact, Sara Crewe from Frances Hodgson Burnett's Little Princess.  I got tired of reading stories about dinos with a penchant for bad choices (and watching the hilarity ensue) and pulled out my old favorite.  The girls love Sara almost as much as I do.

I tried to get pictures of me, in my costume.  Somehow, all that ended up in the frames were random bits of me.  An eye.  A nose.  I need to to talk to Ernie about looking through the viewfinder.  Ha.  (And no, no one here ever guessed my costume.  I looked remarkably like a lazy witch....all black, and no hat.  And since I make jewelry, no one batted an eye at the foreign coin and baker's twin confection around my neck.  Ah well!)  Her pretty little necklace will be in the mail tomorrow.  And no...it's not a coin on a string ;)

We had such a full Halloween this year- just too much fun.  I taught my morning piano lessons and we hustled out to the YMCA for my weekly Zumba class.  Afterwards, we did school while Cocoa slept, then got all dolled up for our day on the town!  Wonder Daddy's office hosted a Halloween party in the afternoon- going into downtown Seattle is always a huge adventure for the kids. We came home in the afternoon, and Wonder Daddy too Mimi out to pick his bikes up from their annual tune-up.

I don't know.  Does she look excited that it's Halloween?  It was SO FUNNY to see my dancing blonde as this brunette.  Her Dad and I kept thinking my niece had snuck along with us.  But, you know that Snow White has to have raven hair.  It kind of got lighter as the night progressed- by the time I put her in the shower before bed, she had old-woman-gray hair.

(The shower.  OH the shower.  This spray-on hair color is awful!!!  It's chalky and rubs off on everything.  I tried putting it on Cocoa, but he kept rubbing it.  I put him in the bath, which left a huge black ring around the tub...it was like the Cat in the Hat had visited!) Cocoa LOVES our neighbor's apple tree.  As soon as we get outside, he runs across the driveway shouting "APPUH!"  (And Nana, we all love our Halloween shirts :) There was a costume contest at work.....but only if EVERYONE dressed up.  Here's our fearless lumber jack, sporting my grandpa's plaid shirt.  A plaid flannel shirt he gave me in high school, after he'd worn it for a few decades.  That's good stuff right there. I knew the girls would be cold in the evening, so we made felt capes for them. For the first time ever, we all went out trick-or-treating.  I left a bowl on the porch.  It was SO much fun!  Cocoa was such a hoot.  He finally figured out that going up to the door meant he got more candy, but he really wanted to trade with the nice ladies.  He'd fish out a piece from his bucket and leave it in theirs :)  Mimi was sprinting house to house, cape flapping.