Imitation is the Best Form of Flattery

By popular demand (meaning, my mother told me to) here is Mimi's debut.  If you can't quite tell, she's singing the song I had just finished running through.


Mimi Sings Just Like Mommy from Myrnie Twin on Vimeo.

So.  Did you hear about the state that Summer forgot?  Yeah, that's us.  Not even the EASTERN half has had enough good weather to ripen their tomatoes.  Everyone who was on top of things and got their basil in the ground on time had to watch it rot away.  Tomatoes didn't go in the ground till at least July.

But hey!  Let's take a look and see what's going on in the front yard!

My tomato patch- sunny and warm, they like it!  Some are staked with cages, some are simply enjoying their space. 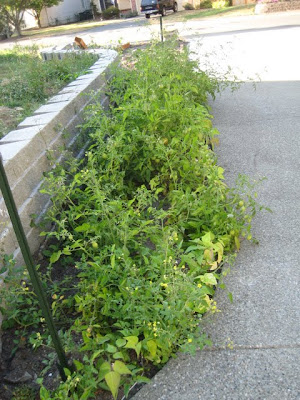 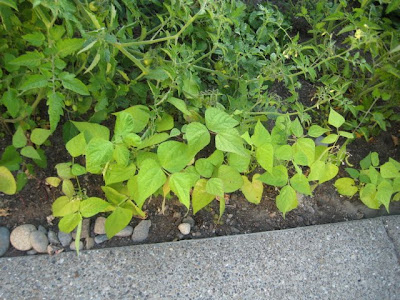 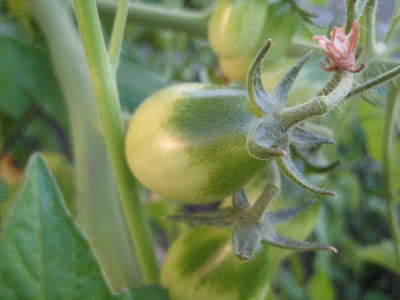 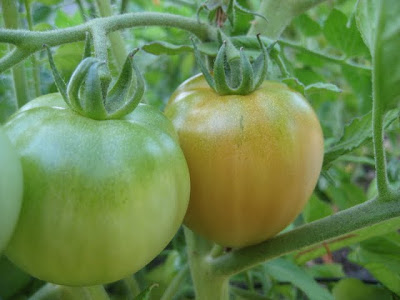 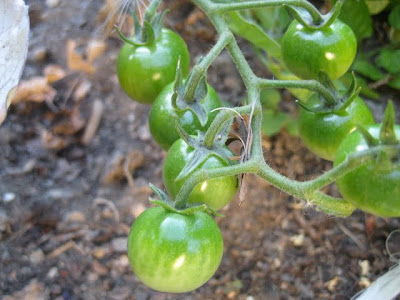 Roma (these are delicious and tart- they'll be great for sauce!) 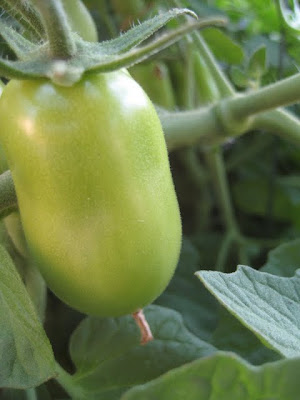 Not-a-bush-bean?  Do bush beans produce tendrils, if given the chance to climb a pole? 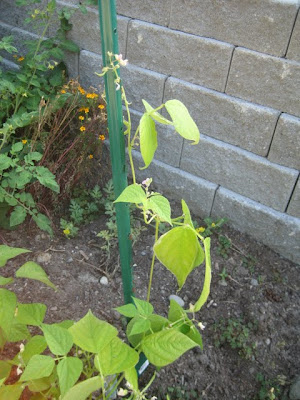 Hello tomatillo.  Where did you come from?  There must have been seeds from last years patch in the dirt we threw down here- it looked like a weed when we left on vacation, and I came back to a 2-foot-tall plant a week later!   I wonder if we'll get any fruit before the frosts come in October?  August seems awfully late to start from a seed like this :)  I know if there IS any fruit, I can pull the whole plant out and let the fruit ripen on the bush in my garage. 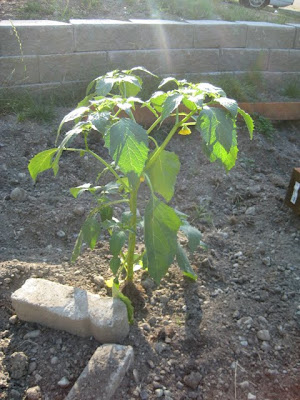 I have beans cooking on the stove, and we need to throw sweaters in the car "just in case" when we leave the house.  I feel like we totally missed summer!  I'm grateful for the nice days we've had though- they've been gorgeous :)
Posted by Myrnie at 1:28 PM 7 comments:


We've been over the mountains for the past week. The Cascade mountain range act like a giant filter to squeeze out all the water that blows in from the Puget Sound and the Pacific ocean, so while the West part of the state has rain forests and mild weather year-round the Eastern part is sunny and dry in the summer, with cold winters. (i.e., the Eastern part has actual seasons.)

My parents rented out three big 'ol houses near a big 'ol lake, and filled them full of family and friends. Yes- on the last evening, everyone got together for dinner and that was hamburgers for 25! Lucky for LoLo and I (the resident cooks) our brothers volunteered to head up the cooking crew for the last night. Before counting heads :)

We've been coming here for years, it's such a fun tradition. It's getting so big, I don't know what will happen in the future, but MAN has it been fun to get everyone together. This little "resort" community has so much to do- boats, ski-doos, mini golf, a beach, tennis, pools, lots of hills and roads to bike around on, basketball, volleyball, a little farmers market across the road, and on and on. This is our first time in a few years with ALL the siblings here, and that's been a real treat too.

The kids have been inseparable- Aunt LoLo went way over the top and made new dresses for all the girls so they could match. Here's Ming-Wai and Ernie in their red and white dresses (do you agree with me that they're pretty hard to tell apart from the back? The joys of having cousins with genetically identical mothers :) 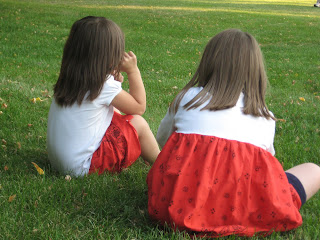 Ernie and Mimi playing at the beach. We were out there every morning by 9:30, before the crowds. For some reason, the crowds thought that 72 or 75 was too cold to go to the beach. Excuse me? 75 degrees is about as good as our summer afternoons get at home. It's FINE beach weather :) 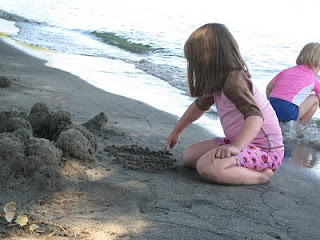 Mimi playing mini golf. She was pretty good at this- whack the ball off the tee as hard as she could, toddle over to grab her ball, then toddle over to the hole. She'd carefully place the ball a few inches from the hole and smack it in. Yay!! 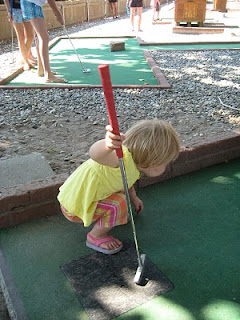 This was Ming Wai and Ernie's favorite perch at night- after dinner they'd split a popsicle and sit at the very corner of the lawn. We had a great lot, right at an intersection with a stop sign. Ernie figured it was her duty to stick her hand out and yell "STOP!!!!!" at all the cars whose drivers, obviously, couldn't read as well as she could. 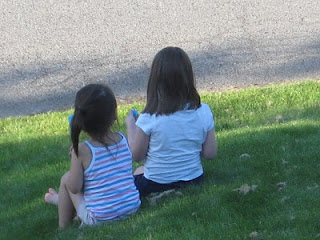 It's been such a fun time, but it's time to be home! Just a week left until Ernie and I start Kindergarten together, so there will be plenty to keep us busy this last week of summer.
Posted by Myrnie at 10:10 PM 6 comments: 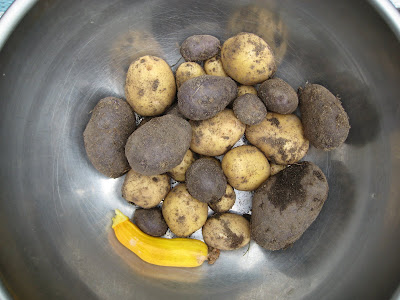 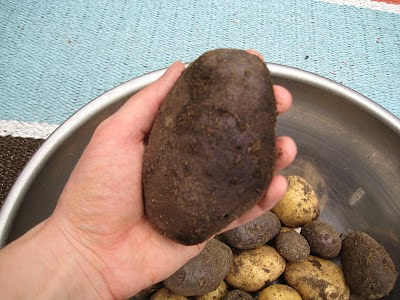 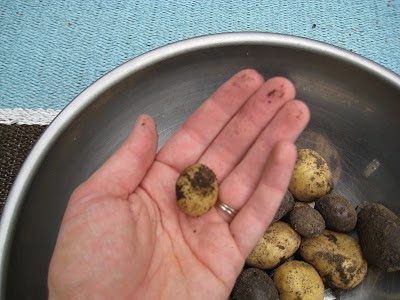 The girls and I pulled our potatoes out of the cans yesterday (I drill old garbage cans full of holes on the bottom, throw about a foot of dirt in, and plant 4 or 5 sprouted potatoes. As they grow, cover all but the top four inches or so with dirt, compost, or straw, until you've filled the can. Keep adequately watered, put them in a hot spot, and when the plants DIE, dig out all the dirt to find the potatoes!)

This year was our most disapointing harvest ever. Normally I find potatoes in the bottom half of the garbage can, this time I only found them in the bottom foot. We've had a very cold summer, and this might be why. I didn't use seed potatoes this year- the purple ones were organic potatoes from my CSA, and the yukons were just from the grocery store. Both got too old to eat, right around the time I was going to plant, so I threw them in the cans.

Next year I'm going to fill the can with more dirt before I plant, maybe even half full, and see if that helps. I didn't realize how short a season these particular potatoes had- I believe I planted these in March, and harvested in August. Yukon Golds, and a heritage purple potato.


One of our yellow summer squash plants seems to have some sort of disease- do you see where it looks like it's been eaten on the end? Every single squash gets about 4 inches long, then start disappearing like something's eating it, until it's mostly gone. IS something eating it? My friend had the same experience last year, and a nursery told her it was a fungus. Anyway, the plant right next to it has not been bothered at all, so I think I better pull this one up and throw it in the yard waste cart, because I'm not getting any squash off it, and I don't want whatever bugs or fungus it has to spread! 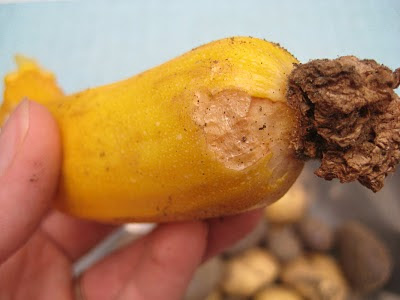 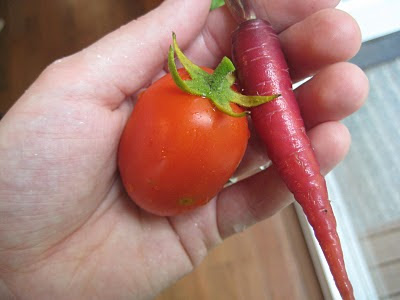 OK, so my dreams of an enormous veggie garden kind of went *poof* rather fantastically, but look! A tomato from my yard! This has never happened before, in 5 years of growing tomatoes. It's red, it's not cracked, it's a decent size....I like it! The purple carrot, yeah it was a bit premature...but I wanted to make sure Ernie understood that we. are. growing. carrots. Like her favorite vegetable, ever, coming straight out of our garden. (Purple carrot on the outside, orange carrot on the inside- she forgave the purple for the sake of the orange. Why do I keep forgetting she is not a fan of the new and strange?)

What a Girl Wants

Do you want to know one of the reasons I never told y'all I was pregnant?  Your ignorance of the fact was the only thing saving you from my daily declarations of despair.  It's true.  Now that you know, all I want to say is:


Nesting is starting to kick in, on my "up" days.  I cleaned the upstairs playroom with the girls for TWO AND A HALF hours yesterday.  Yikes.  We organized the toys, recycled a tub full of papers, sent all the Tupperware back to the kitchen...I even got out the crevice tool and vacuumed the baseboards and window sills.  The girls were shocked when I was true to my new mandate: You get out one toy, you play, you put it back.  I sat next to the toy cabinet for an hour enforcing this rule!  (Please don't let them know it's because I was too tired and sore to get up.)  But, in my defense, this is the "upstairs" toys- things they don't get to play with unsupervised, like board games, art supplies, and play dough. 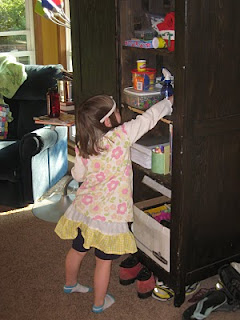 (I love the way Ernie wears her headbands)
The husband swears I did this last time too, but I don't remember being so miserably hungry all the time!  So tell me, moms: What do you keep around for emergency snacking and meals?
Posted by Myrnie at 9:40 PM 10 comments:

Congrats to our Winner!

Huge congratulations are in order to DG- she won our CSN giveaway!   I've e-mailed DG...but if we don't hear back from her, I get to assume she's a fictional character, and will pick another number.

Thanks everyone for playing!