Today the girls had their piano lessons and spent the morning coloring and playing mother may I.  Since I had a bit of work to do, that sounded just fine!  We got our school work done and did our mid-section review.
Ernie covers more and more in each section, especially in math and science, and it's getting harder to keep everything straight in her head.  The last science section covered the five kingdoms of the natural world, and got into each.  This section we are looking at vertebrates, invertebrates, ecosystems, food and energy webs, and biomes.  So far.  Math we are covering the properties of multiplication and mental multiplication of double-digit and single-digit factors.  Reading, we are still working through Robinson Crusoe, and in history we've gotten through the Spartans.  Composition we have covered I think seven types of planning webs.  She also has poetry and art, plus spelling, grammar, and phonics workbooks as well as occasional technology lessons and social studies.
Mimi is still in the delightful "I have 3 apples and get 2 more" stage of math that just begs for games and fun things.  She is doing awesome in her reading, tearing through chapter books, and loves all her school lessons.
J with his running partner- jogging strollers are awesome! 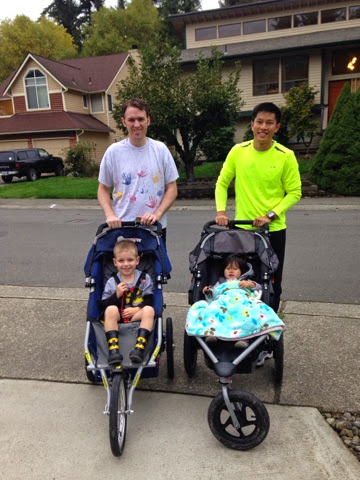 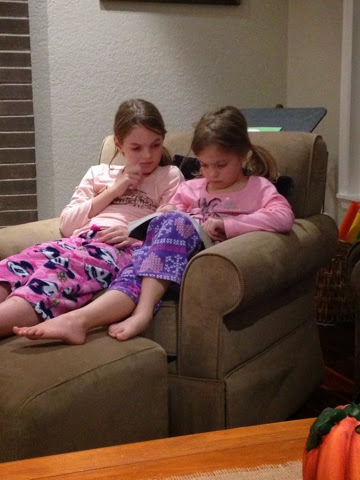 How Mimi Sees Herself

Mimi, are you clever?
Yep.
Are you strong?
"Umm, not really!" she laughed.
Mimi, what is your favorite part of your body?
"My heart- because loving friends is the best thing we can do."
Well, when you look in the mirror, what is your favorite thing you see?
"My eyes" she said softly.
- written October 2014
Posted by Myrnie at 3:39 PM No comments: 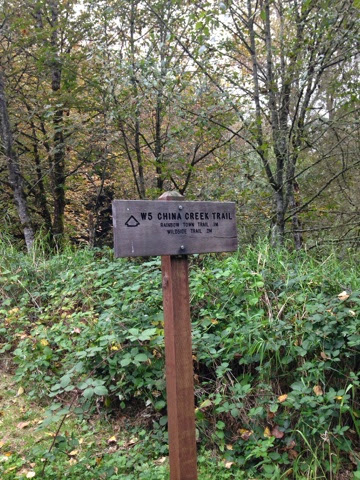 The girls spent the afternoon at their gym class and Cocoa and I stopped at the nearest trailhead to hike while we waited.  I have been putting off hiking since last Fall when I tried hiking there with three kids and for whatever reason got totally spooked being out alone in the woods.  We chose meadow, open, trails today and saw lots of friendly hikers.  If my GPS was right, we covered a mile in about 45 minutes.  By the end Cocoa was so fed up with my attempt at "speed" I would hear a "PSSSHHHHHH" from behind me as he hit me with a freeze spell- I would freeze in place while he inspected whatever rock or stick caught his attention, and then would shoot another beam to un-freeze me and we could move forward. 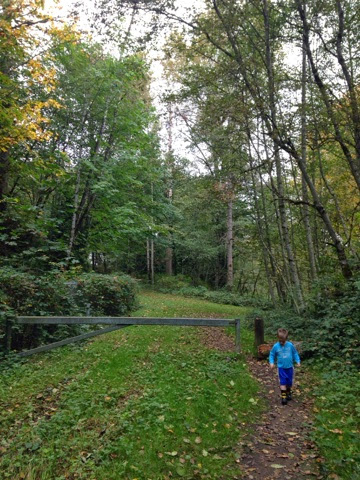 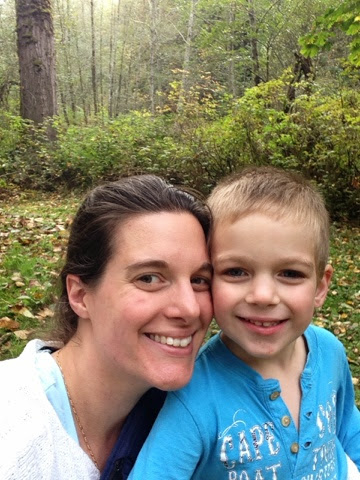 After class I dropped the girls and their cousins off at my parents' for a sleepover, J picked up Cocoa for a big Dude Night of high school football, burgers, and donuts, and I had dinner with my sister and her in-laws.  I had never been to their home, it's beautiful, and she made such a yummy meal.  From top right, it's thousand year egg, chicken with onions, eggplant with black bean, and Chinese-style sausge.  She served a beautiful bowl of garlic broccoli as well. 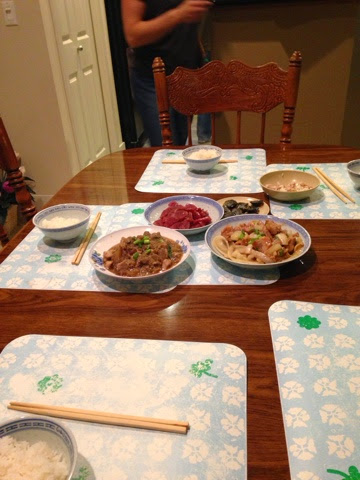 I had to scoot off to my piano lesson in town- I can see the progress I have made in the last year, but I still have so far to go it's ridiculous.  I had no idea how much technique there was... How much was possible.  Sounds ridiculous, but it's true- it didn't occur to me that playing harder music would require a new level of technique instead of just being able to read the notes faster.  My main skill up to this point has been sight reading- it's invaluable as an accompanist, and I am very good at it.  It's allowed me to help a lot of soloists and choirs out of tricky spots, because being thrown a binder of music a week or two before the performance is depressingly common.  It's amazing how learning a new way of bending your elbow or turning your thumb under can make an impossible song possible.
I met my sister and niece for dessert nada wander through the craft store after my lesson, and got home about the same time as the guys.
Posted by Myrnie at 11:08 PM No comments: 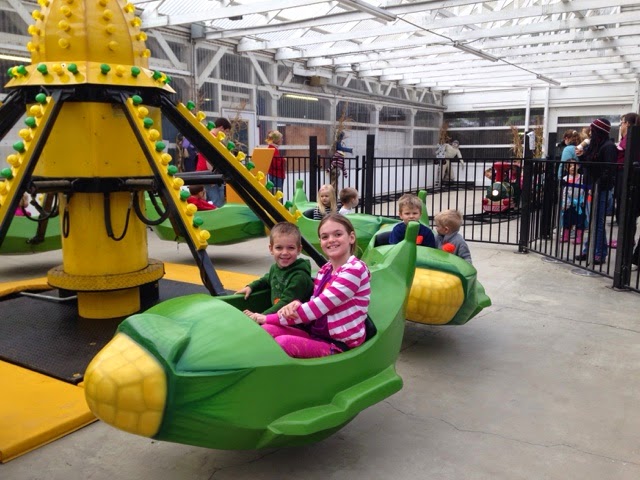 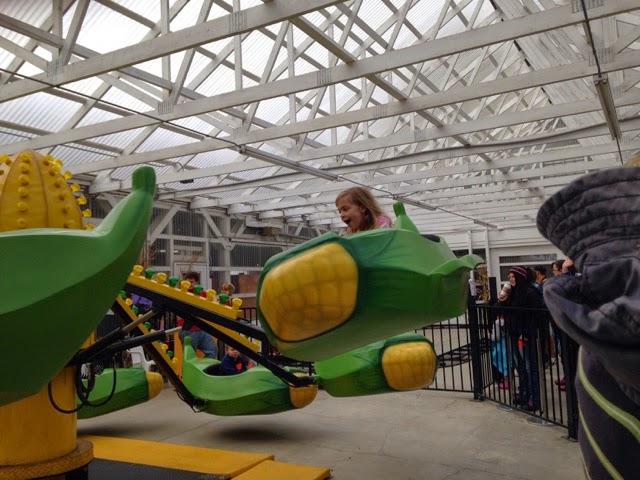 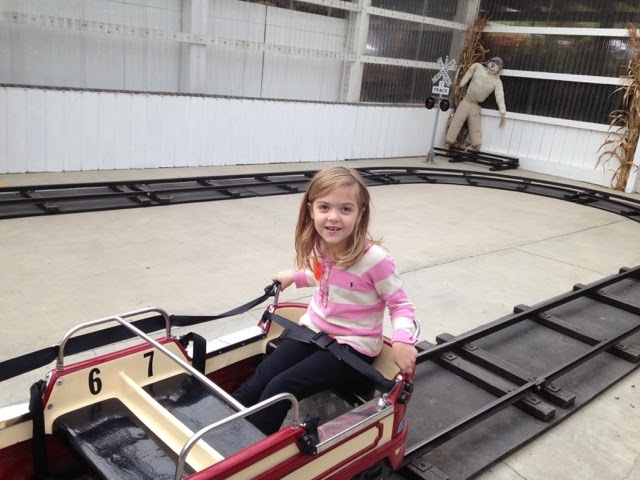 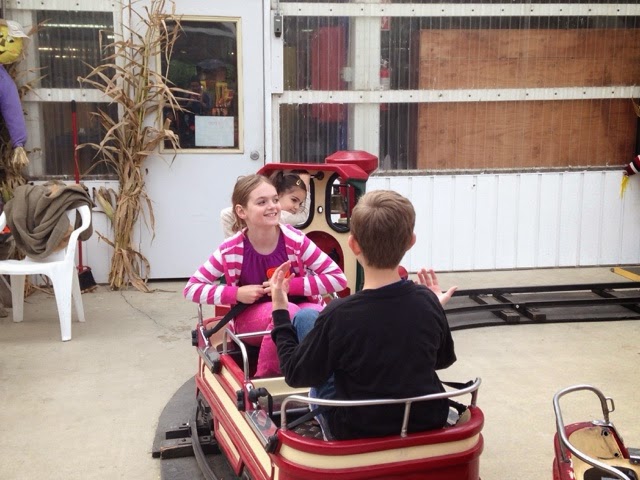 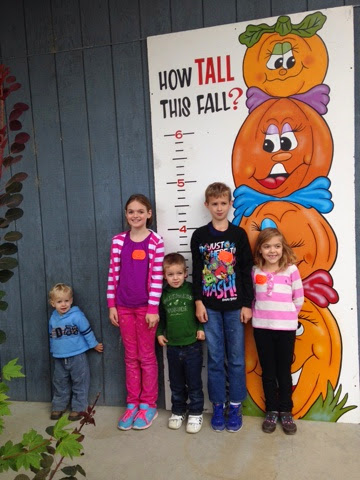 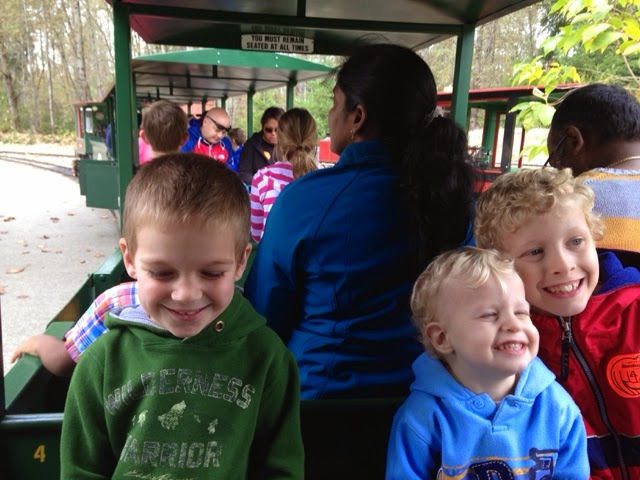 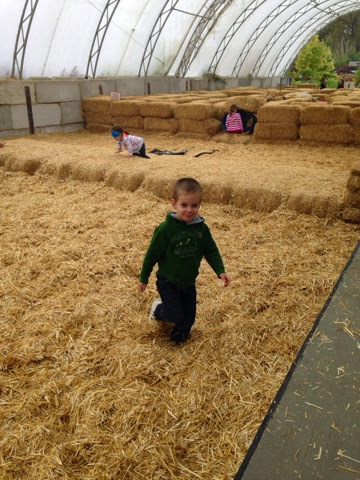 A local homeschool gal set up a "self-guided tour" at Remlinger Farm this week- we got to participate just by paying the reduced admission and saying which group we were with.  This is the second time we have gone, and it's so fun!  There are rides, a steam train, puppet show, animals, a hay jump and hay maze.... And you get to pick out a pumpkin on your way out of the farm.  For $9 per person, it's a screaming deal.  The kids had so much fun, and we ran into our friends soon after arriving at the park.
Posted by Myrnie at 10:52 PM No comments:

I went to bed with a head cold and woke up at 2:00 with a boy kicking my head.  It was not a perky morning around here for anyone!
My sister is a darling and answered my Facebook whining for a yuja cha delivery- yuzu is sliced and preserved in honey, a lot like a marmalade.  She introduced it to me after her Korean mission companion introduced it to her in Hong Kong.  My new induction stove is so fast I can have a small pot of boiling water in the time it takes to get a mug and spoon and scoop some of the jammy citrus into my cup.  Delightful! 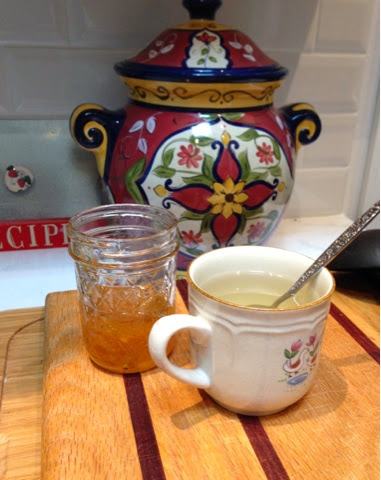 The kids spent the morning playing board games- Monopoly is math, right?  They were pretty pleased to find the packing box full of board games Sunday night. 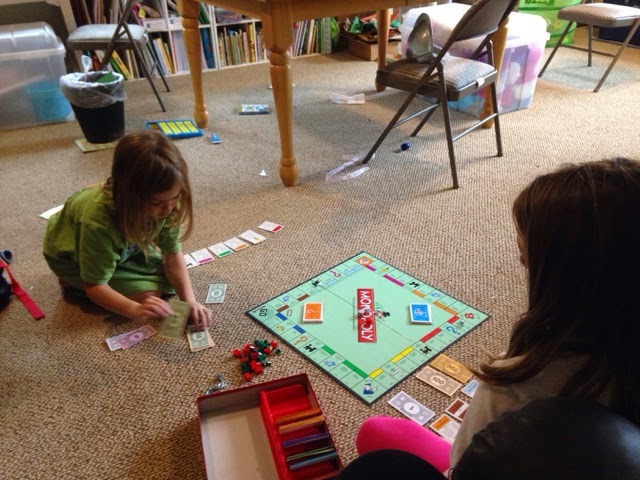 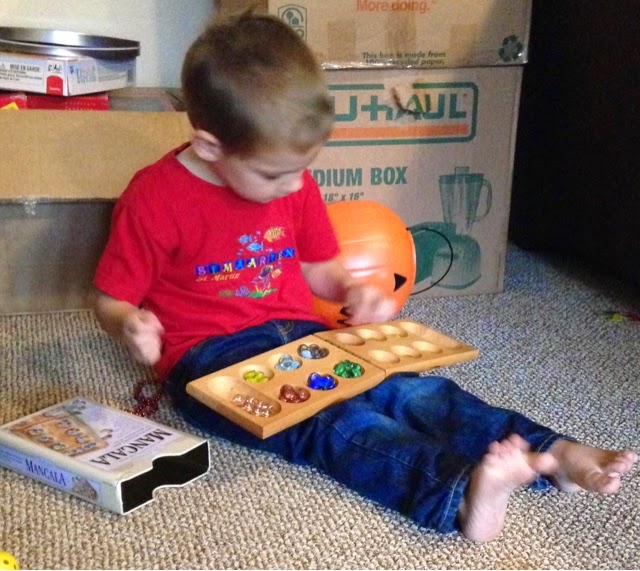 We got Mimi's school work done quickly, and Ernie finished her math in record time.
I made a nice lunch today, just to do something nice for the kids.  Rice balls (onigiri), meatballs, waxed cheeses, and heart-cut carrots simmered in fish stock (dashi.). I made myself a rice ball with pickled plum paste (umeboshi) in the center just to try a traditional combination- it's very good! 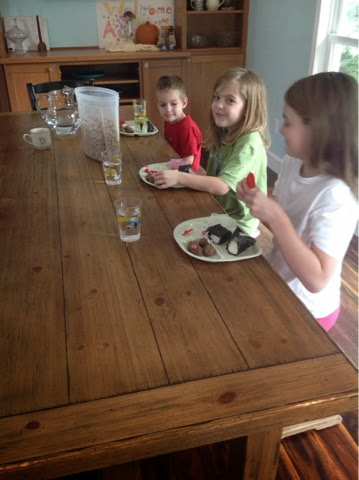 Ernie finished up her work and after the kids cleaned the playroom they had the rest of the afternoon to themselves. I taught one piano lesson and made a pot of miso soup for dinner, with carrots, spinach, and udon noodles. 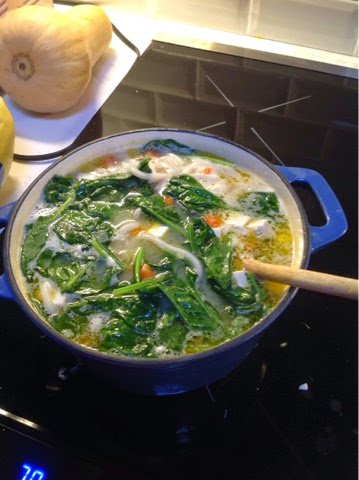 J found out about a monthly open mic night in town- he went tonight and had a blast.  He was a good twenty years younger than the rest of the tight-knit group, but they were supportive and delightful and he hopes to go back in November!
Posted by Myrnie at 11:01 AM No comments: 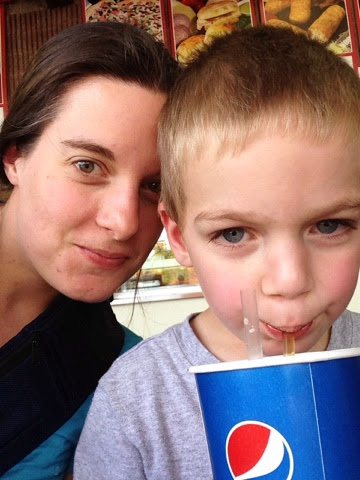 Cocoa and I stopped for a treat while we waited for the girls to finish their gym class Friday afternoon. 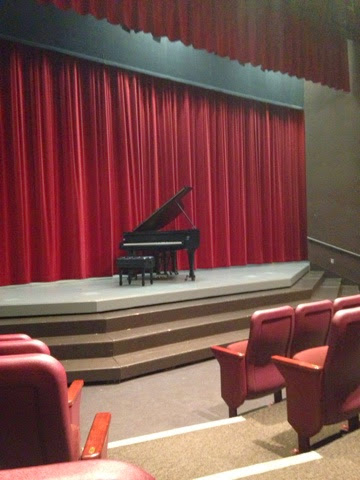 A festival I had spent months preparing for assigned me a slot during the Saturday evening session- that session is specifically for the Priesthood holders and J watched it at home while I went to compete.  It wasn't easy for him to watch with the kids running around and I appreciate it. 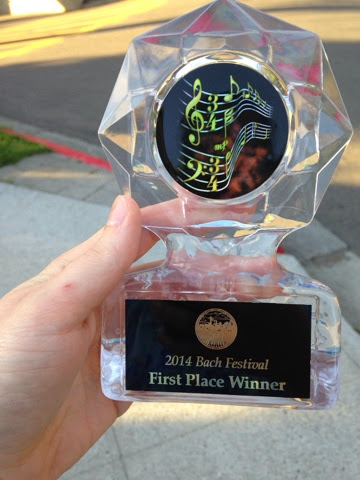 I played Bach's Invention No. 8, from memory.  First time I have memorized anything on the piano since I learned Praise to the Man in elementary school.  It's funny, I really need to put my pride in check when I go to these festivals.  My teacher wants me to go, so I sign up and enter myself in the adult amateur division.  I DO learn a lot, and performing like this is a great experience.  But... I am not exaggerating when I say that there are five-year-olds who play better than I do.  This isn't an "everyone come play!" Festival, it's a festival where you would find those little YouTube tykes who need stools for their feet and their fingers move in a blur.  Every division competes against itself, and within those divisions entrants are grouped by musical selection.  A sonata player would not compete against a concerto or a fugue.  So there is a lot of opportunity for awards, which makes the little child prodigies happy I am told :)
My award was literally for showing up- there were two adult amateurs playing that day and the other player was playing a fugue.  We both walked out with first place trophies.  But you know... We showed up.  No other adult students even entered, and I am still incredulous that we can make it work for me to be studying piano right now with three little kids at home and lots of stuff going on. 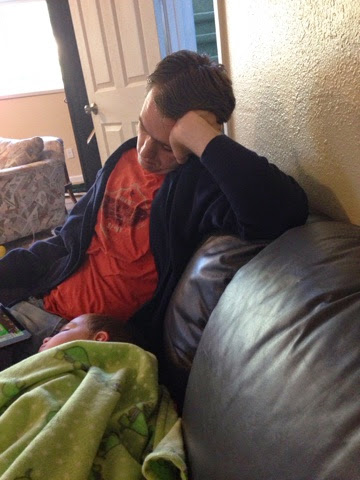 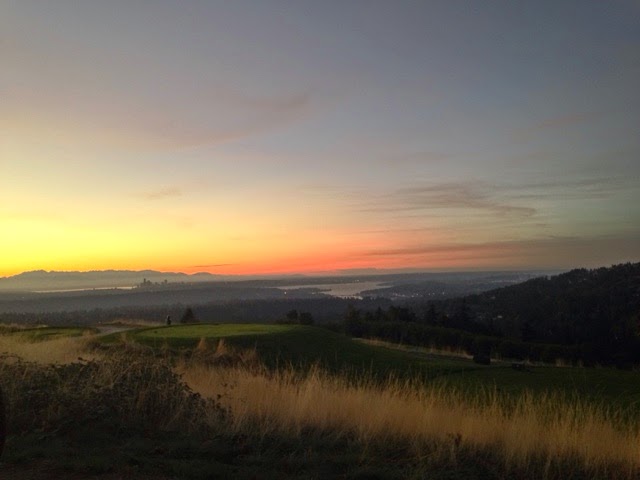 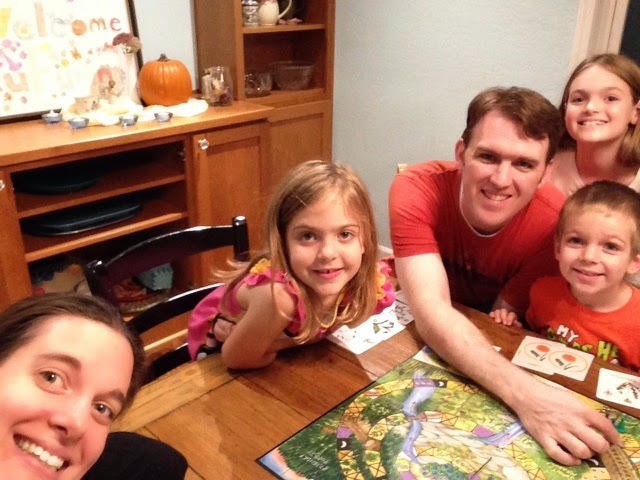 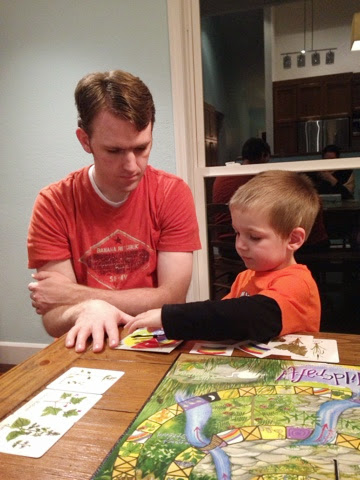 Sunday was a quiet day- at one point C fall askew in his dad's lap.  Such a sweet thing, J didn't want to move him.  I made a big batch of caramel corn as a treat- we took a long walk while it cooled.  There was so much caramel corn we made it into balls and dropped them off at a friends's house.
We finished the day with a very rare family board game (Wildcraft).  I normally just watch everyone else play board games, they aren't my favorite.
Posted by Myrnie at 9:38 AM No comments: 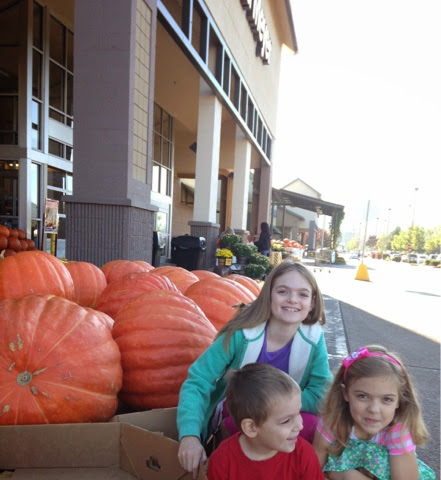 I can only do a few things each day.  This is a hard lesson to learn!
Today is the day we are in charge of dinner at the women's shelter- with the weekend swallowed up with other activities, grocery shopping took up our morning.  Lunch and preparing the dinner took up the afternoon, and then since 2:30 seemed like a rotten time to start school I spent about two hours doing house tasks I haven't had time for- hanging some pictures, cleaning my shower, teaching the girls how to dust mop, installing hooks in the broom closet, just all those little things that take time.  The kids have been enjoying a rare 70 degree October day with bikes and board games.  It will be two months before we are in charge of this meal again, hopefully next time I will get my shopping done over the weekend! 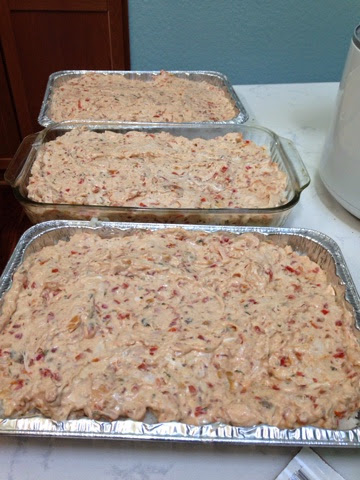 We left to drop off the meal as soon as J got home from work.  With our own portion in the crockpot, waiting and hot when we got home, and a big salad it was a nice meal.
Posted by Myrnie at 4:13 PM No comments: