A Question of Translation, of Ethics, of Beads 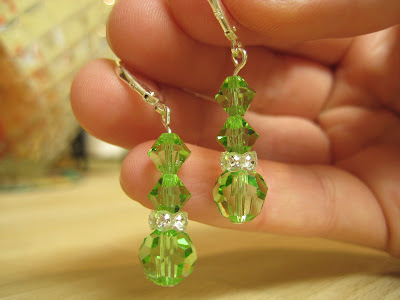 This time last year I was starting on a large bridal jewelry order- peridot-colored crystal earrings and necklaces for all the bridesmaids, "aurora borealis" clear crystal for the bride.  I was pretty pleased with how they turned out, and posted a tutorial for the earrings on this website.  One Pretty Thing featured the tutorial, and for a few days this blog had traffic like it had never seen before!

A little while later, I noticed a lot of traffic coming to my site from a particular website.  Turns out their main deal is finding tutorials and translating them into Spanish, and including the original pictures.  A link to my original tutorial was included, which is how I first noticed it.

So: how would you feel about that?  Flattered that they liked your tutorial well enough to take the time and translate it?  Miffed they never asked about using your photos?  Creeped out by the way information travels on the web, and once you hit publish you have no idea where your words and pictures will end up?

I'm trying to be more vigilant in watching my traffic, but I know I can only see links to my work.  If someone has lifted the pictures or text out, I'd never know.  Recently a blog I follow considered shutting down- she writes about Monstessori-based activities she does with her small daughter, and found that a preschool in Florida was using her activities (great) and featured pictures of the blogger's daughter on the school website as advertisement for the activities done at the school (so absolutely not great.)  This mother never would have known, had she not had a reader who saw the pictures on the website.

Another blogger, a craft blogger, was mailed a stuffed toy from a reader.  A company had lifted a free pattern posted by this blogger, and mass produced the toy to sell.  Another blogger, this time a graphics designer, found fabric with her designs at both Spoonflower and made into clothing in a department store!

I received a Flickr mail last week from a student asking to include pictures of my children on her blog- her college photography professor asked the students to create blogs to showcase their favorite Flickr pictures, and would I please let her use mine?  I never wrote back, but I will.  "No, please don't use pictures of my babies."

So, are we wrong to put so much on the web?  I try to keep my children out of this blog as much as possible (now.)  My private flickr account is mostly private (if you want to see pictures, you better be on my "friends" list or you won't see much! *grin*)  But what about creative work?  For most of us, the crafts and tutorials we make are just for fun, so only our egos are hurt if someone "steals" our work.  Right?

I'm still not convinced.
Posted by Myrnie at 3:00 AM

There is a way to make it so no one can copy/paste from your blog. I saw that idea from another blogger who also had her stuff stolen. You might want to google how to do that - I do not remember where I read it, but was before I figured out how to star items on my google reader (sigh). Anyway, it makes it impossible - especially - to take the pictures. I suppose they could type out the directions, but they'd never get your kiddo pictures.

I'm only conflicted about photos. I don't know how much to post.
With regards to the crafty stuff.... as soon as it's out, it's hard to monitor and pretty much free for all.

I'm sorry that happened to you. That's not fun.

I did the copy/paste thing. It's pretty easy to do. You can find instructions if you google it.

I don't have a flickr account and I don't have any tutorials or business related stuff on my blog so I haven't had any problems. Honestly, I really don't post anything of much interest to anyone other than my family. It's just my journal. I do monitor traffic but I don't tend to worry.

I think that plagiarism exists in all media formats and that because blogs are on the internet it makes it easier to track and catch.

I'm with Su, it's pretty much the pictures I worry about. To some extent I'm "honored" if someone wants to copy me, but I would like credit and a link back to my site.

I know that there are ways to protect our sites better, not sure of all of them- It would be nice if people would ask for or at least tell you they are using something you have posted. It is scary sometimes. Let me know if you find a way to protect your site better- I may want to use it.

Hrm...interesting. I really don't have an answer. Obviously, I showcase my kids like a peddlar. They're what I brag about.

I don't know if you heard, but there was an etsy shop that was based ENTIRELY on selling patterns that the seller had found for FREE on the web? Not even making the items...which would have been justifiable. No, they saved the patterns to their computer, and then charged $7 a pop to send them out to other people.

Some people are cunning and mean, and i don't know what to do about them.

Wow, yeah some people are cunning it seems. I have used many tutorials and even 'adjusted' some to fit my needs. I love the web when it comes to wanting to be crafty for those who aren't terribly creative enough to figure out how to do it by themselves(haha, me). I have even used a tutorial of yours that I tweeked. As far as pictures of kids. That should be a territory that isn't breached. Some people have no boundaries of what is appropriate. I am really glad that student contacted you for permission. That was the responsible thing to do and not just 'using it' anyways.

I know there is a way to add code to your photos so that people can't copy or save them. But I don't know what it is...

The photos are what I worry about. And since I am the most non-crafty person on the planet, I have nothing of value to share. I only post photos of my daughter... but the concerns you listed are why I don't post photos where you can see her face.

Sorry that happened to you -- yeah, that's a bit creepy! As a writer, the stories I have published are copyrighted, and the articles become the property of the magazine that pays for them and publishes them...but then, you never know where things end up -- those people should contact you first before using your materials, and never should they use your photos.....great earrings, Btw...I'm a Leo and peridot is my birth stone.

Wow Myrnie. Just wow. Much to think about. Much sympathy to offer.

I would be so freaked out if my kids' photos showed up somewhere else! I haven't ever put any on my blog but they are on facebook and from there, it is just a small skip and jump to everywhere else. And taking someone's work to translate or mass produce? I think that's stealing.

Oh Myrnie!
Isn't it sad what this world has come to? Who would have thought that we would have to safe guard our personal photos that we have wanted to share. Oh my how sad this is. My daughter started putting locks on her photos where they could not be copied. This issue has made me believe I need to do the same thing. Thanks for the reminder.

Thank you on a happier note for sharing your beautiful earrings with us this morning. They are exquisite, and I know the bride will be so thrilled to pass these to her bridesmaids. You are a very talented artist.

I have signed up to follow your blog. I can't wait to see what you share next. Country hugs, Sherry